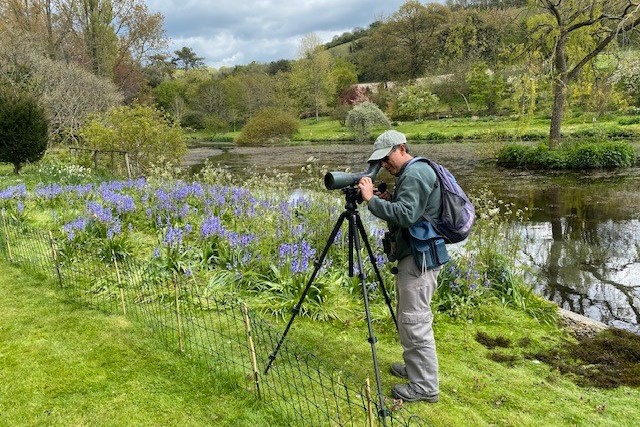 Bird observations made at Springhead will help form a picture of current global bird populations.  Two green woodpeckers, a great spotted woodpecker, a little egret and a goldcrest were among the 36 different bird species observed by local ornithologists Willian Perez and Martin Judd on one recent day.

‘Despite the weather being very wet and windy we managed to see some wonderful birds’ said Willian, pictured above, who has been carrying out regular observations of birds at Springhead over the past few weeks. The results of the Global Big Day survey on Saturday 8 May have been recorded on Ebird, an online platform, as part of the annual celebration of birds around the world.

The event was also World Migratory Bird Day, and among the bird species spotted at Springhead that day were some which have travelled great distances to get to the UK, including swallows, which would have flown from South Africa in April or May, and travelled through the Sahara Desert, Morocco, Spain and France, covering 200 miles a day. Blackcaps, including the one pictured above, were also observed – this species used to just come to the UK in the summer, but increasing numbers now spend the winter here and take advantage of the abundance of food in garden bird feeders, having come from Germany and north-east Europe.

Willian Perez has been photographing and filming the birds at Springhead this spring, as well as recording them, and has produced some wonderful shots, including the barn owl below.

It is hoped that some birding days will be held at Springhead in the summer, when people will be able to participate in observing the wide range of species which benefit from the varied habitats at Springhead and in the surrounding countryside.